In this post you are going to shock. Astronomers claim that at the university of Auckland, there are actually 100 billion habitable planets just like earth in the milky way incomparably more than previous estimates that is 17 billion. There are more or less 500 billion galaxies in this universe. If you can't imagine. Have a nice look at this. There is somewhat in the region of 50,000,000,000,000,000,000,000 planets that are habitable. Its upon you know to calculate that one of those  50 sextillion planets has the suitable condition for nurturing alien life or not. 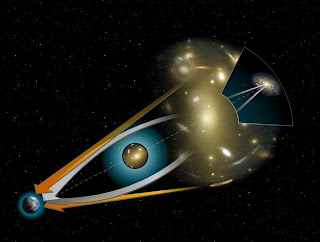 The previous figure of 17 billion earths like planets in the milky way , this figure came from the Harvard Smithsonian center for astrophysics in January which analyzed data from the Kepler space observatory. How they did that? Kepler actually measures the dimming ( apparent magnitude) of planets /stars , transit in front of them. The more the star dome, the larger the planet's size. We can judge the planet's orbital period through repeated observation. Through this we can usually drive the orbital distance and surface temperate. According to Phill York ( professor at Aukland university ) Kepler's technique generally finds  "earth like planets that are close to parent stars". And they are hotter than earth too ( and  not habitable ).

The technique which they used to analyze the data is gravitational microlensing. York says. "We anticipate a number in the number in the order of 100 billion." the kiwi astronomers are very clever they gonna make a new list of earth like planets that are more accurate than both lists. They hope to generate a new list by interpolating the list of planets that are generally cooler  than the earth and Keplers list ( generally hotter than earth ).
What is gravitational microlensing?
This an effect that theorized by Einstein in 936.actually, light emitted by the star is bent by massive objects with larger gravity. Basically this thing makes astronomers busy in finding out how they big air. This technique is used to detect planets that are the size of Neptune and Jupiter in recent years. Now yock and his colleagues at the university of Auckland have proposed a new way for detecting earth sized planets. The astronomers hope to use this new techniques of detecting planets with huge suite of telescopes ( located in china, south Africa, Australia , New Sealand , Hawaii and Texas ) to confirm their work ( validate their estimate of 100 billion earths like planet).
DON'T FORGET TO COMMENT AND SHARE THIS ARTICLE.
Posted by Hamza at 11:49
Email ThisBlogThis!Share to TwitterShare to Facebook
Labels: AMAZAING NEWS