HOW BLACK HOLE FORMED:
First lets see the formation of black holes ( life of a massive star).
Stars more than six times as massive as our sun are called massive stars. A massive star has a shorter life span than the sun or other low mass stars. Hydrogen present in the core of massive stars is used up with a much faster speed. So one time comes ( which is about 50 --100 million years ) when no hydrogen is left in the core of a massive star. At this time it is becoming worse, the core collapses and the star become 1000 times greater than its original size. It is now called giant stars named as supergiant.
With the passage of time the supergiant become so dense that it cannot bear the pressure of outer layers. The outer layers start to crash inward with a tremendous explosion which is called a supernova. At the time of a supernova the light of stars became much more than all other stars of the galaxy. Great shells of gases fly off the store. Only the tiny core of the star remains left. This store contains only neutrons so it is called a neutron star. It is extremely dense some times after the supernova explosion the massive star becomes a black hole. 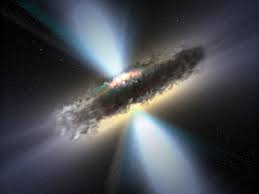 IS BLACKHOLE BLACK ?
You think that black holes are black no they are not. They are dark but not black. They slightly glow and emit radiations, which include visible light too. These emitting radiation is known as Hawking radiationsnit is named so because of Stephen Hawking, Mathematics Professor at Cambridge Univeristy. He discovered this spectrum. They lose their mass too due to this continuous emitting light and will evaporate due to continuous loose of their masses until and unless

They have some other sources of sustaining them like interstellar light and gas.

WHAT WOULD HAPPEN IF YOU FELL INTO A BLACK HOLE?

If you were to take a step into a black hole, you would stretch like spaghetti; the gravitational pull of a stellar-mass black hole could lead to spaghettification.

Posted by Hamza at 02:46
Email ThisBlogThis!Share to TwitterShare to Facebook
Labels: AMAZAING NEWS