Finally uncle of Lumia series released with great specs then other Lumia models. Nokia camera is nothing when they picture in high zoom, but this model removes any kind of doubt except its price. Nokia launched this phone with 41 mecapixel cameras. Nokia also revealed us that its lumia 1020's sensor hardware and  design are exclusively new preferably a recycle of that found in the 808 preview.
Lumia model also has their own nokia cam app. This model has latest cam app.
Major specs:

It also has a gorilla glass screen which shows display very crisp and bright. It also kills germs on the screen to make a high quality display that's the specialty of gorilla glass.
Nokia tried very hard to make lame 1020 as thin as possible. And it is lighter than other company Lumia models, it has great camera tricks so you don't have to buy digital camera any more if you have one than sale it. Because the new technology is right there in front of you. it can zoom only using one finger, you don; t have to pinch on the screen or something else odd.
Taking photos is very handy, just like DLSR you have to press the shutter button halfway down to focus. You can also select focus point simply by tapping the screen and the button remembers who you are. 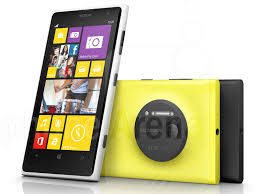 Posted by Hamza at 00:28
Email ThisBlogThis!Share to TwitterShare to Facebook
Labels: REVIEWS