MAKE YOURSELF INVISIBLE TO MOSQUITOES

A mini vampire ( mosquito) can detect CO2 (carbon dioxide) from hundreds of feet away which arises from the body. And they look at their meal. This tiny patch made by GREYFRANDSON , MITCHELL BROWN AND TORREY TAYANAKA works amazingly. It makes you invisible to mosquitoes. It can protect you from mosquitoes. You just have to patch it in your clothes and it will work automatically. It jams the mosquitos radar ( carbon dioxide detecting device ). The patch creators say that you will be invisible upto 48 hours. A researcher has found three groups of chemical that can deactivate or disrupt the mosquitos  carbon dioxide receptors. 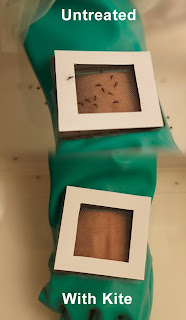 The basic purpose of this project is Uganda "one of the toughest proving ground there is" .
With your help, they will able to help people on a large scale like 1,000,000 hours of protection during a large field test for this offsprings who are suffering from malaria infection. its rate is very high which is 60% .It will allow them to optimize Kite before they ascend for global distribution. the kitespatch's failed test is rigorous and projects of this type can provide tons of data, while helping the peoples who need it most.