Funnily enough, our planet DID once have rings. According to current theories, millions of years ago a planet-sized body called Theia collided with Earth. A huge amount of material from Earth was blown up into orbit by the impact, where it formed a ring. Because this material was orbiting outside of earth's Roche limit, it eventually coalesced into the Moon.


These illustrations by Ron Miller show what our skies would look like if we had rings that were the same proportional size and position as Saturn's. 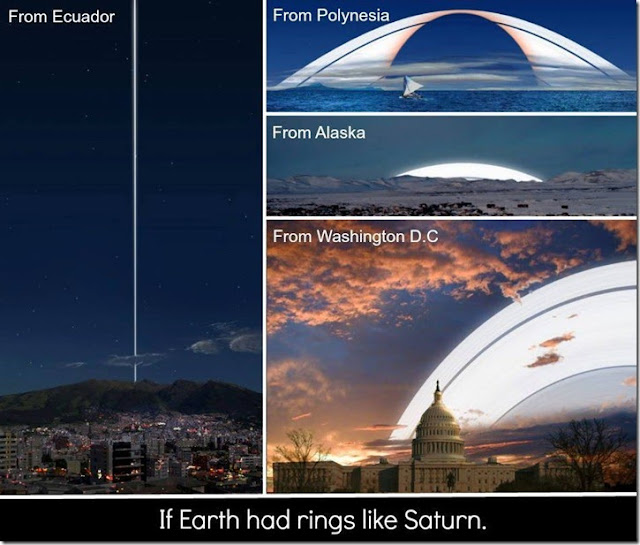 Some astronomers believe that Saturn's rings are material that was unable to form into a moon because it lies within the planet's Roche limit. The gravitational pull of Saturn prevents particles from clumping together to form a moon. Another idea popular among scientists suggests that during the time when Saturn was first forming, it had one or more moons just outside its Roche limit. The bigger a planet is, the more gravity it has. And the more gravity it has, the bigger its Roche limit is. So as Saturn grew larger, its Roche limit grew, too. The limit soon moved past the inner moons. These moons soon broke apart. The remnants of the destroyed moons eventually formed the magnificent rings we see today. There may still be large pieces of these ancient moons within the rings. They would be much smaller than their ancestors but a thousand times larger than a typical ring particle. Another theory suggests that a few hundred million years ago—at a time when the early ancestors of the dinosaurs were roaming Earth—Saturn may have had no rings at all. The rings formed when one or more small moons wandered too close to Saturn. When they got within the Roche limit, Saturn's gravity ripped them apart. After millions of years of bumping against one another, the pieces of moon were ground into the tiny particles that form the rings today.

Any one of these scenarios could have produced a ring around the earth. It hardly matters, since wondering what our planet would look like with a ring is really just an exercise in imagination.

Posted by Hamza at 21:48
Email ThisBlogThis!Share to TwitterShare to Facebook
Labels: TECHNOLOGY NEWS