BUILDING SOLAR POWER IN SPAIN RATHER THAN GERMANY COULD SAVE BILLIONS

We get benefits from technology only if we use it properly otherwise it would be worse, and sometimes it leads us to loss. The same thing happens in Europe. Building of solar panels and wind turbines at wrong place gives no desired outcome but  only wasting of dollars.
They installed their projects in Germany ( the less sunny area) rather than spain ( more sunny area). And wind turbines should build in windy places. 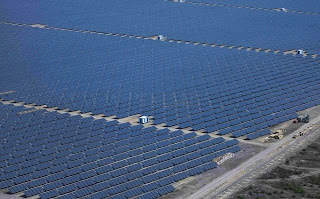 The blindingly obvious suggestions run contrary to what's actually happening. For example, a solar panel in Spain generates twice as energy produce by solar panel installed in Germany. The reason is obvious that there sun shines more.But here the matter is something else they installed plants in Germany more and only a fraction of it installed in Spain.
Siemens calculates that if you were to install solar panels and wind turbines where the natural resources are best and then string power lines to convey the power to what's needed you could save about $60 billion dollars by 2030 because you should install fewer of them.
One more this type of mistake is in the U.S in new jersey, which gets far less sunshine than southwest U.S but policies that favor solar power is with new jersey.

Posted by Hamza at 23:34
Email ThisBlogThis!Share to TwitterShare to Facebook
Labels: TECHNOLOGY NEWS